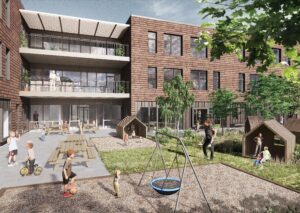 Photo: Early-stage life cycle analysis helps drive CO2 emissions down. This new, combined kindergarten and care home is in Kolding, Denmark, and the total projected CO2 footprint is reduced to 6,1 kg/sqm per year.

NREP, the urban investor with €18 billion of assets under management, has introduced an internal carbon tax to incentivise rapid and deep emission cuts. With the real estate sector’s environmental footprint too large to ignore, accounting for a staggering 40% of global carbon emissions, NREP is taking urgent action. The company has committed to reducing embodied and operational CO2 emissions by 30% and 50% respectively before the end of 2023.

The new internal CO2 tax will help drive innovation by putting a monetary figure on the cost of carbon to the business. The tax becomes a central factor within the investment decision-making process and serves as a means for NREP to accelerate its journey towards net zero by 2028.  The tax is introduced alongside a green incentive to motivate project teams to implement sustainability efforts exceeding market standards and secure above average sustainability certifications.

NREP is committed to becoming entirely carbon neutral by 2028 – encompassing both operational and embodied carbon – and the new, industry-leading internal carbon tax will be a key driver in this ambition.

According to a recent carbon pricing report from McKinsey, 23% of approximately 2,600 companies surveyed indicated that they are using an internal carbon charge. Within the real estate sector, just 4% of companies have adopted the mechanism, trailing far behind the energy sector (40%) and the financial services sector (28%).

Whilst the general market view on the cost of quality carbon offsets is currently around €30 per tonne, NREP will be adopting the EU Trading System as the primary benchmark, setting the tax its current level of €90 per tonne. The tax for embodied emissions during construction will be paid as a one-off at asset completion and operational emissions generated by existing buildings will be paid annually.

The carbon tax will be re-invested in the respective projects to improve sustainability performance and reduce emissions in the most effective, science-based way. Among the initiatives is a carbon capture program, which will combine well-established methods as well as new technologies such as direct air capture.

Peter Bakker, President and CEO of the World Business Council for Sustainable Development, said: “NREP’s decision to incorporate carbon emissions as a cost directly into investment and operational decision-making through a carbon tax demonstrates leadership at the highest level. It shows how the cost of carbon can be integrated in a clear, measurable way that directly affects the business case and sends a clear signal to the wider built environment industry.”

Claus Mathisen, CEO of NREP, said: “Humanity is facing a code red, and we need action now. Targets set for 2050 or 2040 won’t lead to meaningful reductions fast enough. The good news is that reducing emissions often adds up to a positive business case for construction and operations, as we’ve proven at NREP.

“Sustainability actions are most powerful when they are taken early on and are at the core of a business. Putting a price on carbon is a great motivator. To reduce the CO2 fee as much as possible, teams are now doing a deep carbon analysis on every building within NREP’s portfolio.

“Our internal carbon tax is a means to an end. It puts us one step ahead in adjusting our business for a greener future, with regulations tightening every year. As such, it reduces risks and drives business value. We see a surge in demand for sustainable real estate, from customers, banks, and investors alike. I firmly believe that decarbonising now will equate to a future advantage.”

The carbon tax was piloted earlier this year and is now in full effect for all emissions not eliminated, including both operational and embodied carbon. To further drive innovation, NREP’s decarbonising road map also includes three ‘earth shot’ projects. NREP is committed to completing these projects by 2025 and they will become 100% CO2 neutral, across operational and embodied carbon, without external offsets.

To validate the transition towards net zero by 2028, NREP has set near-term company-wide emission reduction targets in line with climate science with the Science Based Targets initiative (SBTi), measuring its progress against 2020 levels.

NREP has pioneered real estate sustainability with initiatives like the use of CO2 neutral geothermal heating, the largest rooftop solar power plant in the Nordics, the world’s first 100% upcycled concrete building, and ‘UN17 Village’, the first large-scale project to align with all the UN’s 17 Sustainable Development Goals.

About the World Business Council for Sustainable Development

WBCSD is a global, CEO-led community of over 200 of the world’s leading sustainable businesses working collectively to accelerate the system transformations needed for a net zero, nature positive, and more equitable future. Members come from all business sectors and all major economies, representing a combined revenue of more than USD $8.5 trillion and 19 million employees. For more information, visit www.wbcsd.org

Published: November, 4 2022
Back to all articles